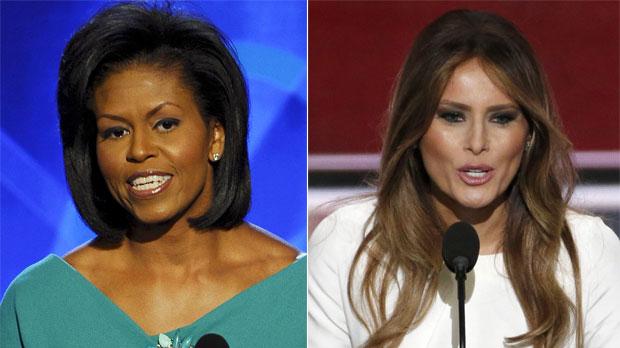 By now, we’ve all heard about the chatter that’s revolving around Melania Trump, but in case you’re just catching up, here’s the CliffsNotes (yes, pun intended):

Last night at the 2016 RNC Convention, Melania Trump gave a speech that sounded more than eerily familiar. As the people of the Internet were quick to point out, there were passages from Melania’s speech that echoed Michelle Obama’s speech at the Democratic Convention in 2008. And it wasn’t just one or two lines – Melania’s speech had identical chunks to Michelle’s speech.

Take a look for yourself:

And the Internet is now currently having a field day to drag Melania for this, with the hashtag #FamousMelaniaTrumpQuotes trending on Twitter:

As both a writer and a teacher, I know that plagiarism is something  that is taken quite seriously in both the editorial and education worlds. When I write an article, I make sure that my angle is unique, that I couldn’t even be potentially accused of stealing someone else’s idea. If I use an outside source for information, I credit it. If I use a quote, you can be sure that I always link back. When it comes to other people’s words, you can never be too careful.

As a teacher, I feel even more strongly about this topic. I teach middle and high school students, and at the beginning of each year, I do a lesson on plagiarism. We talk about ways to use other people’s words correctly; we talk about MLA citations, footnotes, and bibliographies. We talk about the consequences of plagiarism, of which there are many.

The first time I had a student plagiarize was during my first year of teaching. My students completed a creative writing assignment where they wrote their own suspenseful thrillers. We had just finished reading The Tell Tale Heart and The Monkey’s Paw and Halloween was right around the corner.

I was sitting at my desk, grading one boy’s story when this sentence starter caught my eye:

Perhaps you can call it a teacher’s intuition, perhaps it was a hunch, or perhaps it was the fact that this particular kid was a mediocre student and I knew he wasn’t capable of starting a sentence with that kind of imagery. Don’t get me wrong – I believe in all my students, but I’m also realistic about their range of vocabulary, sentence structure, and organization. For whatever reason, I pulled up Google and typed a full sentence of his project into the search toolbar. Sure enough, an entire story popped up – and it was word for word what my student had turned in.

Since then, I’ve caught a handful of students who have plagiarized – mostly during research papers, lazily hitting copy & paste from About.com or Wikipedia instead of doing actual research. The consequences are always the same – a zero on the assignment, and either a detention or suspension, depending upon the gravity of the situation and if it was a first or second offense.

For as much as my teenage students protest about their consequences, I always tell them: “You’re lucky you’re learning this lesson now. In college, you would be kicked out of school.”

And this is true. Most colleges and universities will expel a student who plagiarizes. For example, Harvard University’s Academic Dishonesty Policy reads: “Students who, for whatever reason, submit work either not their own or without clear attribution to its sources will be subject to disciplinary action, and ordinarily required to withdraw from the College.”

And yet, for Melania Trump, there seems to be no repercussion at all, because the Trump campaign is denying all allegations. Whether Melania wrote the speech, or a speech writer penned the words, the fact of the matter is that there’s clear proof of plagiarism – and no one is owning it.

Trump campaign chairman Paul Manafort was on CNN earlier, attempting to justify Melania’s speech. He said, “There’s no cribbing of Michelle Obama’s speech. These were common words and values. She cares about her family.” He also went on to even theorize that Hillary Clinton is behind the accusations, because she feels “threatened” by another woman. (Of course, this is just another example of the GOP’s raging sexism at its best. If the Democratic party had a man as its nominee, this argument would be non-existent. And, btw, Hillary doesn’t control Twitter, as fabulous as she is).

But the fact that the Trump campaign can’t even admit to the fact that there are striking similarities, let alone exact phrases and sentences, is a huge problem – and a scary one at that. When a student plagiarizes, there is little he or she can do to explain it away. The evidence is there. It is black and white. There is no point in debating a cold copy-and-paste situation.

It seems beyond absurd that the Trump campaign could get away with this, that they get away with the stubborn persistence of their augmented reality. Not this time. This can’t be another one of those circumstances where they are allowed to repeat lies over and over and over again to no end. It can’t be another “That’s just a regular star!” situation, where it just dies down after a few days when something else (something equally absurd) comes up.

If Trump supporters keep insisting that he and his family represent the “regular American” (lol), shouldn’t they play by the same rules as those “regular Americans” who get kicked out of school for stealing words?

After all, if my 8th grade student was forced to sit in detention and take a zero for plagiarizing his zombie story, surely there must be some kind of consequence for stealing the First Lady’s words and passing them off as your own on national television.

{featured image via the telegraph}