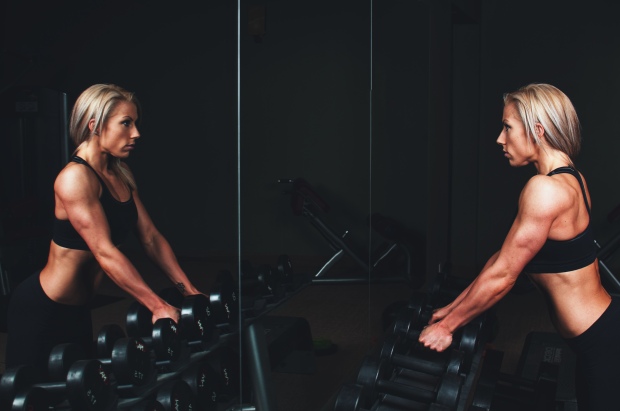 Today is officially named “National Women’s Health and Fitness Day.” And although I’ll definitely exercise today, I’ll be damned if I’m going to jump on the bandwagon and start cutting carbs and increasing my cardio in the name of a “national holiday”. Don’t get me wrong, I love that there is an entire day dedicated to encouraging women to lead healthier lives and become more active, but how in this age of infinite, conflicting information can I define what “healthy” actually is?

I’ve dieted all my life. I’ve been 200 lbs and 140lbs and I’ve been constantly bamboozled as to how I’m supposed to remain a steady weight. No carbs, no fat, count calories, count points, track GI, no gluten, no dairy…the list goes on, and I’ve tried it all. The bottom line is that it created an unhealthy obsession with what I ate and it led to more weight gain and poor body image – the exact thing I was trying to avoid when I started my journey.

I’ve realized now that there is no perfect diet. There is no “correct” way to eat. The world of nutrition and dieting seems to be reluctantly coming around to the idea that restrictive diets are effective initially, but overall harmful to our minds and bodies in the long run. For example, Intuitive Eating is becoming more popular; a way of learning to tune into our natural hunger cues as opposed to following a set meal plan or punching calories into MyFitnessPal. The Moderation Movement based in Australia is holding workshops to help people learn how to adopt a positive attitude towards food, fitness and body image; something that I think is incredibly important for young women today.

The body positivity movement has ramped up significantly in the last year, with Katie Willcox talking to teenagers about the truth behind modelling with her brand Healthy is the New Skinny and Ashley Graham making plus-size women everywhere feel smokin’ hot in their bikinis. But there is still a stigma around exercise that means women see it as a form of punishment instead of an activity to be enjoyed.

None of us are talking to our friends with pride when we announce that we skipped our workout in favor of an extra hour in bed. That’s lazy. The resounding opinion on exercise from the general public is that it must be done. It is a chore that must be endured to either compensate for food we have eaten, plan to eat, or to create a body to replace the one that we already have and totally despise.

As a diet addict and an anxiety sufferer, I can attest to the ups and downs of having a complicated relationship with fitness. Let’s start with the plus sides. When I was depressed, it got me out of the house once a day. When I’m anxious, it helps me burn off nervous energy. Strength training makes me feel invincible. But on the other hand, it can be another vice when all others have been exhausted, while on the surface, it appears to be a healthy habit. I became fixated on doing at least one hour of exercise per day, even though I preferred to do around three hours per day.

I missed family outings in favor of a Body Pump class. I stayed up until midnight to go online and book in with my coach. Refusing to appear like a failure, I went to the gym hungover, sweating Pinot from every pore, and adamant to burn off the late night nachos I had scoffed the night before. I started watching ‘fitspo’ videos on You Tube, where the world of bikini competitions is rife and considered admiral as the thousands of subscribers prove. I was obsessed.

It took a complete burnout for me to realize this was a one-way road to disappointment. I realized I wasn’t doing this for myself – I was doing it to hurt myself. I was pushing myself daily to see how much pain I could take. Eventually, I got so sick of it I had to stop exercising for several weeks to rest, eat a lot of food and come to terms with my ever-changing body shape. I was larger and softer, but without the grueling gym schedule, I now had energy to live a normal life. I’m not the picture of health physically or mentally, but I’ve definitely had a lightbulb moment where I realized the image of “health” that we are sold by the media isn’t anywhere near accurate.

Women today have become conditioned to believe that in order to be considered beautiful, relevant and worthy of others they must continually push their bodies to the limit to get the results they want. The athletes and bikini competitors we see on the internet and on TV are a very small, specialized group of women who have chosen to dedicate their lives to a sport and their training regime is simply not applicable to most people’s everyday lives. I’m all for pushing yourself, challenging your body and seeing what it can do but I draw the line when you start to compromise your social life, friendships and happiness in the pursuit of something so unattainable. I hope that soon the tide will start to change and we can all appreciate exercise for the wonderful, empowering, freeing activity that it is.