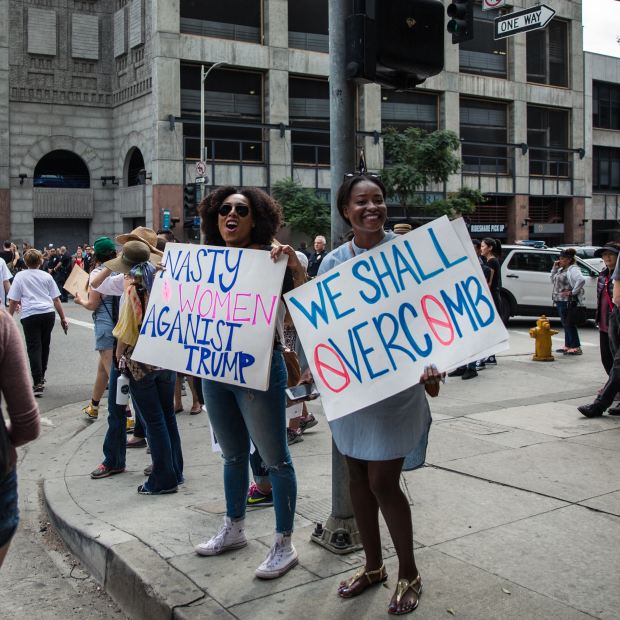 I set out to write a debate recap, but I couldn’t bring myself to find the words. I don’t want to relive, or rehash, or recount that ridiculous, nausea inducing debate. I don’t think anyone does. If you do, there are many, many, many articles out there that can help you out.

I don’t want to talk about last night, because frankly, I’m worn out. The past few days- hell the past year- has been emotionally and physically draining. This election has sickened me. It is poisonous. It is frustrating. It is abrasive. It is too much.

When things are particularly awful, I like to think about how we’ve survived previously awful times. America has a pretty stellar track record of getting through some particularly horrific shit. If nothing else, we are resilient.

Do you ever wonder what Twitter would’ve looked like if it had been around during the Civil Rights Movement? What would’ve been the hashtag? Would there have been so many haters? What would people- what could people- possibly say about King’s “I Have A Dream” speech?

We know now, of course, that they’d be wrong. In retrospect, it is so very clear that they were wrong.

That’s how today’s political climate feels, sometimes: like humanity is disintegrating. Like the end is near. It is a rough, emotionally fragile time. So rough, that I’ve had to purposefully step away several times. Stop looking at the car crash. Stay off the internet. Focus on something good. Do something good. Try to make people laugh.

This is where faith comes in. Faith that things will get better. Faith that we will emerge from this victorious. Faith that this is just a very dark chapter in a very long book about America.

We have to keep that faith. We have to hold it close and keep it safe. We have to let it flourish. We have to protect it. Because faith is the only thing that will keep us going.

There will be a day, not all that long from now, when my granddaughter will ask me about this election. And I can promise you, from the very fiber of my being, she will not be asking me about Hillary Clinton’s emails. She’ll be asking me how we got so dangerously close to electing Donald Trump. How we flirted with horror, how we almost self-imploded.

These are the questions future generations will ask. These are the thoughts we’re all wondering right now. This is our current reality.

Megan Amran said it best in her tweet “With this election we’re simultaneously breaking through the glass ceiling and the rock bottom. We got a really big room now”

The divide between Americans is miles wide. We are standing at two opposite ends of the spectrum. Hate is spreading. Fear is spreading. Boundaries are being drawn. We’re all fed up. We’re all agitated. We’re all ready for a fight. None of us are handling this particularly well.

There are two choices. Two visions. Two different sets of ideologies. And you might think both are full of shit. But you’ve gotta pick one.

If you’ve made your choice, stand firm in it. Honor your decision and then let it go. Let the hate go and the comparisons go and the anxiety and the fear and the what ifs and the tweeting and the podcast listening go. You have made up your mind. Your part is done. The rest of it? The hate and the fighting and the divide? This too shall pass.

This is a defining moment in American history. It already has been. There are 28 days until the election. Spend your days wisely. Lean into your faith. Behave like the person you want to be. Disengage if you have to. Protect your sanity and your faith and your happiness at all costs. Remember that years from now, we will look back at this as just another dark moment in American history. Stay strong.