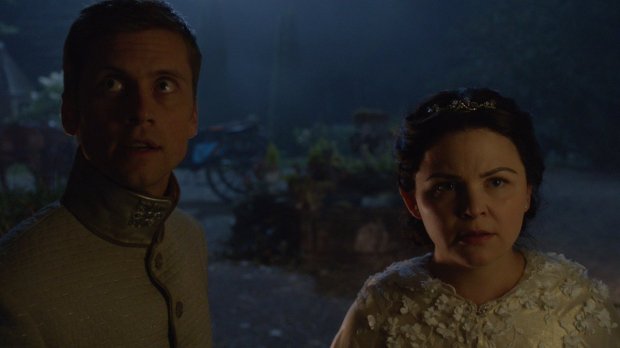 This week we truly do return to the well-loved style of storytelling from Season 1, learning that even a re-telling that we’ve become familiar with may not be the whole story.

Regina is still perplexed about how the Evil Queen is still walking around, enacting nefarious plots when crushing her heart should have killed her. Since Hyde seems to know a little bit about everything, and is also the evil half of a separated character, she hopes to visit his underground prison cell and threaten him? Nope. Bribe him with lasagna.

But once she arrives at Hyde’s cell, she learns that EQ is looking for answers too, but as always, has more flair and panache, outfitting Hyde’s cell in style: credenzas, cigars, and gramophones abound. I would have preferred the lasagna, but alas, Regina isn’t looking for answers from me. Another score for EQ.

At Granny’s, Henry explains to Emma and Hook that he believes he’s completed a sign-in book for everyone who has come from The Land of Untold Stories, asking each person who signed to also list who was traveling in their party so they can locate any missing members.

Sidebar – these people never get any Storybrooke clothes, which I get from a storytelling point of view, but when Hester Prynne strolls by with her colonial garb and big red “A” I died.

Ashley/Cinderella arrives with her daughter and husband to get food to go, and so that Ashley can see the list, stating she would like to know who has children so she can offer childcare for them at the daycare she is running.

While Emma is off talking to Henry, Ashley asks Hook if he think he and Emma will finally have their fairytale ending.

Hook says they’re taking things slow, so slow that he’s still sleeping on a cot on a pirate ship with a pregnant lady who snores. Ah, our mushy-hearted pirate.

Flashback to the Enchanted Forest where we once again see the Ella of yore, mistreated by her sisters and stepmother.

When Ella rescues her mother’s dress from the fire he stepsister threw it in, a key falls out. Everyone’s favorite mouse in a tiny shirt, Gus, appears and she tells him that her mother spoke of a magic key that allowed entry to The Land of Untold Stories. Pre-Rumpelstiltskin she doesn’t believe in magic and tucks the key away.

Back in Storybrooke, Emma busts in on Archie, who is having a session with Grumpy. Apparently Dopey is off getting a degree while Grumpy is stuck working. Dopey shall be dopey no more.

One alone with Archie, Emma expresses her usual concern over her shaking hand and lack of powers, but also shares that she and Hook should be living together but that she’s worried that her impending death makes it cruel to invite this next step with him.

Archie then pulls out the phrase I’ve been hearing from my mother my entire life: Any day I could walk outside and get hit by a bus, but it doesn’t stop me from walking outside. Although with my mother I think it was more of a legitimate concern about living in cities where I had a lot of mass transit.

Leaving Archie’s, Emma sees Sean/Cinderella’s Prince, he’s panicking because Ashley left a note that she found her stepsister’s name on the list and had to find her, oh and his hunting rifle is gone. Dammmn, Cinderella, your story took a turn!

"Too bad there's no such thing as magic, Ella." #OnceUponATime pic.twitter.com/HDCesjJewl

Sean asks Emma how she will find Ashley to which she replies, “How you find Cinderella: with her shoe.” Magic poof and she’s holding a sea-foam green converse shoe. Slow-clapping this one out, writers, gold star.

Jekyll and Regina and brewing by the dirigible (apparently they’re determined to get their bang for their buck with this particular set piece) Jekyll is trying to recreate the separation serum to understand EQs presence, but no dice.

Snow advises Regina to think like EQ to at least understand where she might be spending her time. Regina recalls a key cruel technique: if you want to tear a family apart, look for the cracks that already exist. Now she knows that it’s likely Zelena and EQ have met up. Wait till she learns of the sister cocktail hour they’ve been having without her.

Snow tells David/Charming that she wants more normalcy, and to potentially return to teaching.

“Why can’t I be a princess and a teacher?”

Thinking of teaching, her past, and staring at a table full of chemistry items puts a lightbulb over Snow’s head. She thinks she knows who can help Jekyll.

Emma interrupts Hook teaching Henry to sword fight with sticks (something I did in elementary school but without the hot pirate) to invite them for more of Operation Cobra Part 2, finding Cinderella. The zip after the floating converse to go find Ashley.

Cut to Cinderella and Gus strolling into the ball. A giant cheese plate is carried by and Gus leaves Ella to follow the cheese.

Ella literally runs into Snow on the dance floor and as they talk Snow notices the prince is staring at Ella.

When Snow encourages Ella to go talk to him, Ella asks, “Do you think he could be charming?”

“Oh, that names taken,” Snow replies as Charming swoops in to dance.

After dancing together for a while, the prince leaves Ella on the dance floor for “business”.

She steps off the floor as well and sees that he’s giving a rose to one of her stepsisters.

Evil Stepmother shows up and tells Ella that he would never be interested in her, “He made you into a joke and everyone here knew it except you.”

Ella runs out, leaves her shoe.

At Gold’s shop, David strolls in wanting info on how Gold came to have his father’s coin, the one EQ gave to him.

Gold agrees to give him the receipt information in exchange for something.

Back at Cinderella’s place she decides to use the magic key in her wardrobe. (We had to creep a little bit into Narnia eventually, didn’t we?)

Before she can step in, the stepsister that had received a rose from the prince arrives and stops Ella when she says she’s leaving.

The prince does love Ella, the stepsister is in love with the prince’s footman. Since his job is so low in the eyes of her mother, she and the footman are eloping. The rose from the prince was really a gift from the footman. The stepsister admits that most of her life has been an act, one especially meant to keep her mother happy.

She is meeting Jacob (the footman) that night and she begs Ella not to tell anyone.

In Storybrooke the shoe and the gang find Ashley. Assuming stepsister revenge is still the item of the day, they tell Ashley, “We can’t let you hurt her.”

Ashley tells them they’ve got it all wrong, she has to help (and here she says the sister’s name that no matter how many times I hear it I can’t figure out what she’s saying. Hook and Emma later have this same problem. I, however, have the internet and now know it’s Clorinda.)

Ashley says that she is the evil sister, not Clorinda.

Emma reminds her of their conversation in Season 1, about changing how people see you, and I’m reminded of how much I miss the empowered Emma.

Ashley runs away and Emma’s shaking hands keep her from stopping her.

EQ encounters Emma and gang, but no beehive today.

We’re reminded of the long game that has been such a key part of the show, especially when it comes to the history of EQ and Rumpelstiltskin, as EQ shares that she is eager to knock Emma off the chessboard.

“I want you to see how pointless you are,” she tells Emma, and this is one of the most cutting insults I’ve ever heard on this show.

EQ purple-poofs the gang away into some remote road, to keep them from stopping Ashley.

On Hook’s ship, Belle is reading when David comes to deliver a tape from Gold.

Belle knows that agreeing to make this delivery means that David needed something from him, when David explains that it was to get information about his father, they talk about the complications of fathers and sons. Something Belle is becoming well-versed in. David admits that despite his father’s alcoholism, it was worse having him gone than at home, drunk and sad.

Back at Ella’s place the stepmother confronts Ella about rumors that the prince is looking for her.

She tells Ella, “You look like a trash bin and have the education of my cat.”

And I wish my insult game was as awesome and hilarious as Evil Stepmother’s.

Ashley arrives at a pumpkin farm, assuming this is where Clorinda would be?

Ashley/Ella wants forgiveness, but Clorinda reveals that it was a trap so that Evil Stepmother could kill her.

At Ella’s place in the Enchanted Forest we see the typical prince rescuing Ella scene, but after he proposes Ella says she has to go fix something.

She tries to intervene when Evil Stepmother finds Clorinda and Jacob, but ES decides that since nothing is turning out as she hoped, that she will go to The Land of Untold Stories, she whips out the key, opens the door, pushes Clorinda inside, and Ella and Jacob are left behind.

At the farm, Ashley says she wants to reunite Clorinda and Jacob, explaining that he’s in Storybrooke.

But Evil Stepmother is having none of this and stabs Ashley in the stomach with her cane. (What?!)

Emma, Hook, and Henry have found their way back to town and to Ashley.

Henry reassures Emma that she can heal Ashley despite her shaking, and Emma manages to do so.

Once healed, Ashley and Clorinda hug and all is forgiven.

A new happily ever after.

Snow brings Regina and Jekyll to a garage laboratory, introducing Jekyll to Dr. Frankenstein. She thinks they can work together to recreate the serum, and Jekyll is honored to meet the famed Frankenstein. The bromance we never knew we needed.

At the pumpkin farm, Hook and Emma are drinking punch and eating at an adorable picnic table, Hook incongruous in his black pirate apparel. Emma asks Hook to move in with her, overcoming her fear of living in the moment. Cue the Pinterest decorating board where New England vintage meets sassy pirate.

In Snow and David’s apartment David tells Snow that he has learned that his father was killed in an accident, that he was stabbed. David wants to seek the killer and Snow wants him to instead focus on being a father. We’re left with the sense that he’s going to try to do both.

Belle decides to listen to Gold’s tape that night; it’s him narrating a childhood story for his baby.

She lets it play on, smiling with a hand to her stomach.

In the dungeon EQ is with Hyde, wanting to know how to destroy Emma after her plans fizzled out. Hyde wants freedom in exchange for his help, so EQ happily purple-poofs his manacles away and out they stroll together.

Tell Us: What did you think of this week’s episode? Why do you think David’s father was murdered? 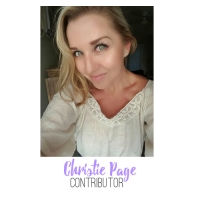