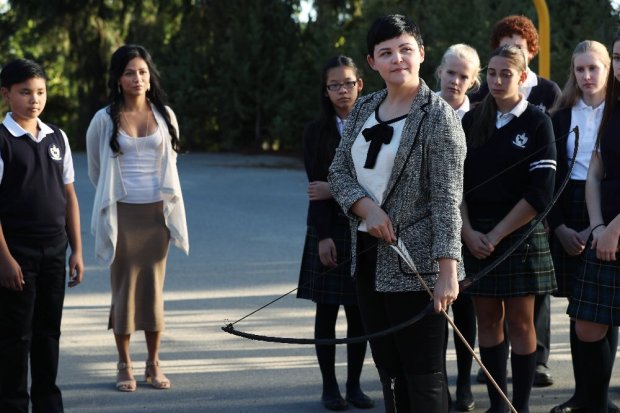 “Every character should want something, even if it is only a glass of water,”- Kurt Vonnegut

A few episodes into the new season and I’m already more pleased than with the awkward, forced storylines of the previous two seasons. When I asked myself why I keep watching even after some dismal writing decisions, I’ve realized that one of the biggest reasons is that every character is very clear in their want for something.

This week, we learn a little bit more about what some of our favorite heroes and villains are looking for, more than the general “happy ever after”.

Rumple/Gold starts us off, deciding that it’s time for a fresh do. The breakup haircut: not just for ladies.

Soon the Evil Queen arrives and I am once again fighting down some serious stomach churning when she turns on the flirt. I don’t know what this choice is that the writer’s keep pushing, but it’s distinctly uncomfortable.

Hyde also appears, because he and EQ are baddie-besties since the jailbreak and go everywhere together.

Hyde is looking for a cameo necklace, Gold knows which one he means and offers a deal. When Hyde says he’s just going to take the necklace, Gold tries to magically choke him to death, but no dice. He can’t be killed, just like Regina couldn’t kill EQ.

Thanks to this lovely encounter Hyde is now extra interested in finding Belle for retribution against Gold.

At Emma’s house, the family is enjoying a massive pancake breakfast courtesy of Charming.

Turns out that dear ‘ol dad is worried that once Hook moves in that they won’t see Emma as much.

Pancakes aside, it’s time for Snow and Henry to return to school! I am the only nerd who is really excited for them?

School is also an awesome excuse to not participate in whatever craziness is about to ensue as Regina and Jekyll bust into the house.

They deliver the bad news about Hyde’s escape, and Jekyll holds up the cameo necklace, explaining that Hyde must have left it as a taunt. The necklace belonged to someone Jekyll had great feelings for.

Better get back to work on figuring out the serum.

In ye olde London, Jekyll is nervously pacing his lab.

He’s talking to the lovely Mary, whose father is apparently due to arrive and talk to Jekyll about his ambitions for a serum that would allow man to separate the higher noble being from the inherent beast within.

Mary’s father thinks Jekyll’s work is too dangerous and refuses to offer him an invitation to the fancypants science club he belongs to. It’s like highschool all over again, but with cravats and brandy.

Once Mary and her father leave, Jekyll starts throwing things until Rumple pops up. He says he’s here to help Jekyll and I’m wondering how he just popped into London since THE ENTIRE REASON FOR THE CURSE FROM SEASON ONE WAS TO GET RUMPLE TO AMERICA!

The serum finally works with a hit of magic from Rumple, and at his urging, Jekyll drinks the serum to allow his other side to go get what he wants.

Back in Storybrooke, Hook is moving off the ship with one trunk, saving Hook and Emma from having the awkward “No wagon wheel coffee table” convo.

Before he leaves he offers Belle a shellphone (Guys, I couldn’t resist the pun) or a mermaid conch, that Belle can use to call Hook and he’ll hear her on his special shell necklace. Five year old me is dying over how awesome this is, current me is saying, “Just use your cell phone”.

Gold shows up and in his desire to protect Belle casts a protection spell on the ship that keeps Hyde out and her in. Gold’s wooing skills at his best.

In the Storybrooke school Snow meets her new student aide Shirin, who looks an awful lot like the Jasmine we’ve been seeing from the promos.

The new teacher from the Land of Untold Stories! 🍎#OnceUponATime pic.twitter.com/1TGJkngHU3

Over in the garage lab the team discusses how to finish the serum, since Rumple helped finish the serum before, and presumably he wants Hyde gone just as much as they do, maybe he’ll help again. Regina heads off to find Gold and Emma and Charming go to track Hyde down with the steampunk purple lightening laser.

Back in London Hyde and Rumple arrive at the Science Academy where Hyde blackmails Mary’s father into accepting him into the club.

In the garage lab (we are really pingponging through this flashbacks this week) EQ and Hyde show up, they put a spell on the cameo necklace so they could find Jekyll and destroy his work.

Snow’s in her classroom trying to teach Newton’s third law and I’m wondering what sort of teaching degree she has, birdhouses one day, physics the next.

In the flashback we see Rumple wake Jekyll up and share the good news of Hyde’s accomplishment. Jekyll is finally savvy enough to ask why Rumple is so interested in the outcome of his work and Rumple says he needs the serum for himself.

In the lab, Regina and Gold discover that the bad guys smashed everything.

Gold says of Hyde, “that’s not some monster from the deep, that’s you,’ something that’s chilling to really think about.

But that same point means that Jekyll knows Hyde well and hid a little potion on the side in case this exact thing happened.

Rumple steals the potion and pours it over his Rumplestiltskin dagger with the intent of killing Hyde, but not helping Regina with EQ, and Regina finally understands that Rumple has made a deal with EQ.

At the end of the school day Snow and “Shirin” are grading papers and they’re all failures. Shirin advises Snow to assert the strength she is famous for as Snow White, and worry less about being the teacher she used to be before she knew who she really was.

On the ship Jekyll arrives to tell Hook and Belle the bad news about Rumple and the serum. Hook runs off to make sure Emma is safe and Jekyll commiserates with Belle about how terrible Rumple is.

Back in London we see Hyde encounter Mary, and we learn that Mary will never love Jekyll because he thinks that passion is something to be disposed of. Since Hyde is all passion all the time, they make out in the park

In the woods of Storybrooke Emma and Charming come across Hyde and then begin to fight, but Gold appears and stabs Hyde in the chest with his dagger.

"It is quite a twist, don't you think?" – Hyde #OnceUponATime pic.twitter.com/EMrXF0k7Cj

Turns out Hyde was expecting this, and again, being one and the same of Jekyll, anticipated the side serum and replaced it with a fake. Now Hyde has the dagger and the power to control The Dark One.

“Take us to Belle,” he commands.

Back at school the kids are outside with Snow and she’s trying to teach physics again, but this time with her bow and arrow.

I want to point out that this probably won’t improve their test-taking skills, but it’s still pretty awesome. Here’s hoping next week they cover tracking skills and outwitting trolls.

Gold and Hyde arrive just outside the ship and Hyde tells Gold that he has another monster you have to worry about.

We learn who this monster is when we see the final flashback and discover that when Jekyll wakes up in bed with Mary he loses his shit over the idea that Mary would sleep with Hyde. In his rage, Jekyll pushes Mary out the window to her death. Jekyll decides to drink the serum and let Hyde deal with the fallout. Hyde is horrified to see Mary dead and we understand that the lines between man and monster aren’t so clear.

Now we can feel pretty uncomfortable about Belle and Jekyll having tea.

Belle senses something is up and tries to get Killian on the shellphone, Jekyll gets savvy and shatters the shell, but Belle picks up a shard and stabs him in the shoulder!

Belle can’t get off the ship thanks to Gold’s spell, and now Jekyll can achieve what he wanted which is to make Rumple pay by making him watch as he kills Belle.

Thankfully, Hook arrives and shoves Jekyll away who lands on a harpoon.

As Jekyll starts to die, so dies Hyde.

Regina shows up and finds the dead men and Gold with his dagger reclaimed. She thinks the serum has worked, but Gold explains, “The only way to kill the doppelgänger is to kill the original.”

That means in order to kill the Evil Queen, they have to kill Regina.

We saw that coming right?

Emma shows up at the pier and asks a brooding Regina if she’s okay.

Regina says that even though Jekyll separated himself from the darkness, the capacity for evil remained,

“When you were the dark one you said you trusted me to do what it took to keep your family safe, I need you to make me the same promise,” Regina says to Emma.

Belle doesn’t want to hear Gold’s excuses for why he trapped her on the boat and we finally learn that it was his first feelings for Belle that caused him to go after the serum in the first place. He thought his feelings for her were a weakness and Hyde’s love of Mary confirmed both that idea, and that the serum was a failure.

The episode ends with Shirin in the woods, meeting up with Mystery Girl from the earlier episodes. Turns out they’re in Storybrooke looking for Aladdin.

Time to get ready to visit a whole new world next week.

What did you think of this week’s episode? Were you surprised that Jekyll and Hyde’s story came to such an abrupt end? Do you think Regina will sacrifice herself in order to rid the town of the Evil Queen? 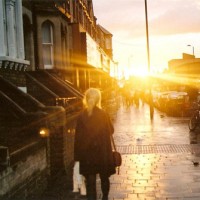