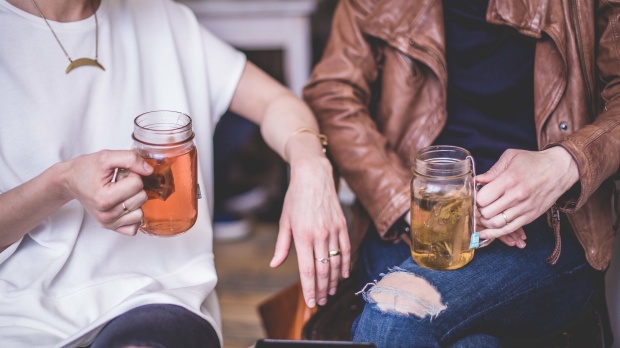 I’m Kate and I’m a recovering emotional bottler. I’ve been known to say “I’m fine” when I’m really not fine at all and I prefer long walks on the beach over long conversations about deep rooted feelings that require prefaces like, “I know that I’m being crazy, but…” and “Please don’t judge me.” That being said, I use the word recovering, because I’m trying to sift my way through some of those old bottled feelings so I don’t eventually explode into a major meltdown.

In working to admit some of the things I battle with beneath the surface to the people I love, I’ve been gifted a few aha moments. One of them happened recently when a friend of mine tossed out the question of why it’s so hard for us to admit when we’re feeling upset, when doubt gets the best of us, and when we experience insecurity.

Because really, those things are normal, aren’t they? We all endure them at one point or another. And to be honest, those negative emotions in and of themselves aren’t that bad. I mean, sure, they feel shitty and I can’t imagine that any of us wakes up in the morning with a longing to feel unworthy, jealous, or fearful, but they aren’t intrinsically wrong for us to feel. They’re human. They’re part of the life process.

I think that where they become damaging and dangerous to ourselves and to our relationships is when we pack guilt and pile shame on top of our lingering emotions. We feel bad for feeling bad. Instead of acknowledging my insecurities and dealing with them straight on, I feel upset with myself for not being more self-assured and confident. Rather than confront the root of my jealousy and consider how to work through it, I feel disappointed for experiencing envy in the first place. I take what’s already churning in my gut and because I’m too ashamed and embarrassed to do anything else, I instead add to it.

It’s hard to admit to the bad feelings, right? They’re like the devil that pops up on one shoulder in a fictional scene while the angel floats atop the other. Of course, we want to choose the good. We want to choose compassion, kindness, and trust. And we can. But first, we have to deal with the devil. We’ve got to acknowledge the ugly, icky, I hate how this feels kind of feelings.

Maybe, it starts small, and feels hard, but we do it anyway. We admit our struggles so we can get past them. We share the voice of uncertainty so we can overcome it. We unpack the labeling of our feelings as weaknesses and start to view them as universal normalcies instead. We unburden ourselves by sharing the load – the good, the bad, and the ugly. Finally, we let out some of that brooding, heavy darkness so we can feel light.

I’ll get the ball rolling, I’m currently working on my 1-year plan so I feel a tinge of jealousy every time I see people who have their entire futures mapped out. I experience a bit of a bad yogi guilt as I dine on my frozen pizza and boxed brownies that aren’t even organic. I still feel like a kid playing grown-up at times, and despite my best efforts, I care more than I’d like about what other people think of me. All those things combined often lead me down a path of perceived inadequacy. They make me feel like I’m somehow playing this game of life wrong, when maybe – and hopefully – they’re just glimpses into what it means to be imperfectly real and relatable.

Brené Brown calls empathy the antidote to shame. She says that “Shame cannot survive being spoken. It cannot survive empathy.” And chances are, once we share, we’re going to learn that we’re not alone. But people can’t be there for us until we’ve let them in and they can’t express their understanding until we’ve opened up. If we want to hear that we’re in it together, we may have to start a few conversations with, “I know this sounds crazy, but hear me out.”

3 thoughts on “I Know This Sounds Crazy, But Hear Me Out”