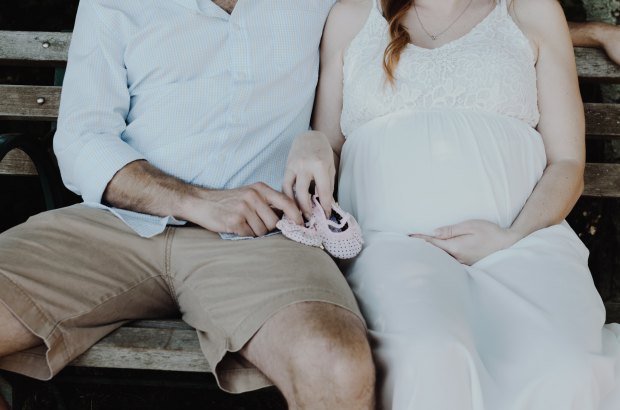 When I found out I was pregnant – I freaked out. My husband and I were trying to have a baby, so you’d think I would have been aware that this was a possibility. But the thing about pregnancy and child birth is that pretty much everything you think you know about it turns out to be misguided, misrepresented, or just flat out wrong. So even though I was actively hoping for and trying to become pregnant, I still lost my shit when it happened.

It took about a month and a half for the fog I felt to lift, and I started to actually enjoy the thought of having a baby, instead of just freaking out that we weren’t ready, didn’t have enough money, our lives were about to change forever, etc.

About 2 days after I started enjoying pregnancy, morning sickness hit. I totally abandoned my intention to eat super healthy and switched to eating literally anything that I could keep down. Fast forward through 9 weeks of constant nausea and exhaustion, I finally made it to my second trimester.

I had more energy, I found out I was having a boy, I started to feel the baby move, and I registered for all of the adorable baby trappings that any modern parent needs. I was particularly excited about the rocking seat that rocks itself and the insulated car seat cover that keeps baby warm without having to bundle him into a snow suit.

So, I was cruising right along, feeling pretty good about life, and then the third trimester came a-callin’. Almost overnight, I was literally huge, my ankles and legs were swollen, I couldn’t sleep comfortably, and I might as well have moved my desk into the bathroom at work because I spent 90% of my day there.

But it was okay, because I was in the home stretch. Sure, most of pregnancy was not what I’d planned on, but I was READY for child birth. I’d taken the classes, I was well read on pain coping mechanisms that didn’t include drugs, I had a birthing playlist and an aromatherapy mister, I was going to rock child birth.

Ahem… that was incorrect. 5 hours in and I was once again losing my shit. I was crying so hard I could barely breathe, I could not stand, sit, or walk without life ending pain, and I was leaking what felt like every fluid in my body.

After my unplanned epidural, I was feeling much better. I was relaxed, I was able to rest, I was once again going to conquer child birth. Ohhh you’d think I’d have learned by now to stop thinking these things.

Little known fact, epidurals can actually make you quite sick. I got nauseous, I started throwing up, my body shivered uncontrollably, and my teeth chattered. The doctor decided that it was time for me to start pushing – which I did. Another little known fact about epidurals: they block pain but not pressure. Meaning, you can still feel the entire process of your child being born. So my thought that once I had that epidural, it would be smooth sailing, was once again wrong. Nevertheless, I made it through (without yelling at my husband too much I might add!) and I was ready for that magical first moment when you hold your child.

Except that it was not so magical. I was exhausted, literally being stitched up and repaired. There were doctors and nurses everywhere, buzzing around, weighing the baby, testing him, tending to me. My husband was crying and holding our child, and I held my new son, too. But I felt like I was watching the whole thing from above.  I felt emotionally detached, foggy from exhaustion, and I just could not shake that feeling.

Since being pregnant and having my son, I’ve felt an intense guilt for not eating better during pregnancy, not having a drug free child birth, not enjoying those first precious moments with my little one, and pretty much everything else that happened during those 10 months.

But, I have decided to let myself off the hook. Because you just can’t expect the unexpected – and your first pregnancy and child birth is definitely an unexpected and unknown territory. Not to mention, my son is fine. He’s better than fine. He’s healthy, he’s happy, and he has a family that loves him more than life itself. Pregnancy junk food, an epidural, feeling in a post-birth haze and all, the kid is alright!

Plus, I know that motherhood is going to hold a lot more things that I did not plan for and envision. So, I can either waste time feeling guilty about these things in the past, or I can just get over them and try to enjoy the moments that are happening now. I choose now. And when I inevitably get lost overthinking and questioning the parenting decisions I’ve made, I’ll look at my son and soak in this moment instead.

Oh – and a few fun facts – the insulated baby carrier cover is actually on several lists of unsafe baby products, and my son hates the automatic self-rocking seat!

3 thoughts on “Expect the Unexpected When You’re Expecting”